Many tracks in Rocksmith are not in E Standard. Retuning to Drop D, Eb Standard etc can be a pain, but it’s survivable. C Standard with “normal” strings though is a different matter. Tuning here can reach the point where the will to live is lost as Rocksmith refuses to recognise the notes as the strings slap against the fretboard.

Is the Digitech Drop Pedal the answer? It transposes the input by a semitone with each turn of the dial so a bass in E Standard can turn into a bass in C Standard with a few clicks and no spaghetti strings.

Does it work? Yes. Dropping a semitone to play some Thin Lizzy tracks worked perfectly. Going down to C Standard to play a couple of Royal Blood tracks needed some slight retuning but it was only +/- 4 or 5 so not the end of the world.

Is it worth it? If you’re often playing Cookie Monster-style tracks which need these low notes then yes, until Rocksmith offers support for 5 string basses with ODLC.

A good friend of mine, who I shall call Simon, since that is his name, has set up a new website dedicated to hosting Rocksmith customs. It’s free to join and I am now posting all my customs there by default. Head over there and sign up – it takes seconds – http://www.customdlc.com/

Although I’ve had it since its release, I’ve never really taken to GPA4, much preferring the feel of the previous version. However, as it’s not possible to get V3 any more, I’ll be updating my customs guide shortly to include GPA4 and Guitar Pro 7, as it’s really time I got with the times!

I’ve always wanted to be able to play with a pick, and after seeing The Stranglers playing at the Cambridge Corn Exchange in March 2019, I decided that it was time to give it another go.

I’d got some picks I’d received as freebies from various sources, but these were all too flimsy for any serious bass playing. Some research told me that J-J Burnel from The Stranglers used Gibson Heavies, so anything which was good enough for him, was good enough for me.

I duly ordered half a dozen heavy picks from DirtyRiffs.co.uk via Amazon. They came packaged in this nifty pick box: 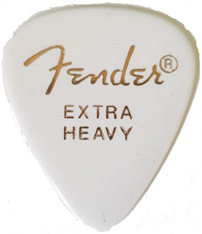 Trouble was, the heavies weren’t heavy enough. Luckily, Fender turn it up to 11 with their Extra Heavies, which are just right for me. 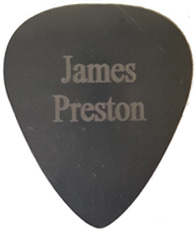 Whilst searching for picks on Amazon, I noticed that a company will engrave a stainless steel pick for you. Here’s mine. If you’re interested, here‘s the page.

Finally, in my Facebook group, someone mentioned Felt picks. Felt? Surely not. Well, they do exist. These came from China. They’re about four times the depth of a heavy pick and quite comfortable to use. The sound produced is a fairly gentle thump. Apparently they don’t last long though.

So how’s it going? Not badly as of the time of writing. I still can’t play as fast with a pick as I can with my fingers, and at rehearsals I’m often dropping the pick so I can carry on as before. I’ll get there though.

I’m still unsure of the best way to play. Make all the movement in my wrist, or use my lower arm. Either way is quite tiring at the moment!

Whilst I learn a lot, and get a great deal of satisfaction from producing custom content for CustomsForge, it’s great to get feedback from people who like and appreciate what I do. I’ve added some of the kind – and often very amusing – comments they have made here.

For several band rehearsals, I’ve been taking my fretless Squier Precision. None of my bandmates noticed, other than saying that I’ve brought a different bass along, although one did say that “someone had stolen the dots”, to which I replied “and the frets…”

It’s a lot easier to play than I’d thought. Experience with Rocksmith showed that intonation needed to be spot on, but with the band, it’s not as critical. It’s a very light bass too which helps. Standing for 2-3 hours with one of my heavier axes really doesn’t do my back any favours.

I’m back to playing the fretted Jazz or Jaguar now but may well go back to fretless before long. One day I shall treat myself to another unlined fretless to replace the Hohner B2AFL which was stolen many years ago.

The new bridge arrived late last week, then I had to wait to pick it up from the local Post Office as there was a customs charge on it #not happy.

The bridge is a nice piece of work, definitely chunkier than the standard fit bit of bent metal: 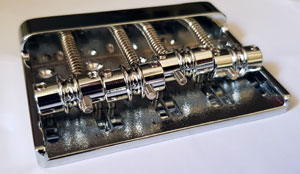 It was simple to fit – take the strings off, unscrew the old bridge, (give the bass a dust), fit the new bridge, making sure that the ground wire was in contact, then put the strings back on again.

The bass looks better with the new bridge – I just have to go through the motions of setting the action and intonation now and see what difference it has made. Hopefully the sustain will have improved in the same way as it did when I added the Babicz to the P Bass.

The standard Squier/Fender bridge on the Jaguar is just one of those crappy bent bits of metal. When the bass arrived, the bridge needed some fettling as it hadn’t been put together properly (nice QC) and since I’d got the nylon strings on it, I’ve never been happy with the intonation. The E string saddle is almost back as far as it will go and Rocksmith often suggests that I’m not playing the right notes, which can’t be right of course.

I did think about putting a Babicz bridge on, but although one transformed my Squier Affinity P Bass, I’m not keen on spending >£100 on a bridge. I liked the Badass II bridge which I had fitted to my Jazz bass by Andy’s Guitar Workshop in Denmark Street in the late 80’s and thought I’d see what Fender had done to the bridge since buying the design.

They are like hens’ teeth! ebay seems to be the only place they can be found at the moment and they’re not cheap either $50+ with another $40 thrown in for postage in some cases. I managed to find one at a shop in Arkansas for around $30 delivered which seemed much better. Let’s see what difference this makes. The new bridge on the Affinity P gave the bass far more sustain so I’m going to be very interested to see whether I can get the same effect on the Jag with this High Mass bridge. Watch this space…

For months now, I’ve had a 9V adaptor running my Boss TU-3 tuner. My bass plugs into this then the Output goes to my laptop for Rocksmith. The Bypass goes to my bass amp for when I want to get loud.

This works well, but I was forever forgetting to switch the 9V adaptor off, thereby wasting electricity and not being very green.

I then found the Birdcord USB to 9V Converter Cable. This means I can run the tuner pedal from my laptop, and when that’s powered off, the pedal goes off. And vice versa of course.

The Birdcord cable works a treat. I had to add an extension lead to it, as the lead is slightly too short for my set up but that was only a few pounds from Amazon. The result is a really neat set up, and I no longer have to curse my forgetfulness when discovering I’d not turned the 9V adaptor off yet again!

My Squier Jaguar came strung with roundwounds. I don’t really like roundwounds – they are too tinny, make too much noise and aren’t flatwounds – so I ordered a set of these for it: 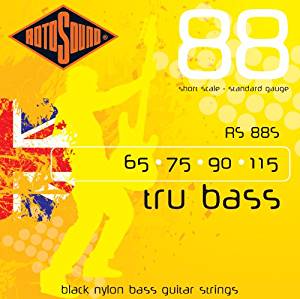 I’ve not used nylon strings on a fretted bass before. My Squier Precision fretless has these as I though they’d be kinder to the fretboard. When I put them on the Precision, I had to open up the slot for the E string on the nut, but there was no need to do this on the Jaguar

After cutting off the excess string before fitting the E string and then thinking I’d cut off too much, I thought “why not measure the string you’ve just taken off against the one which is about to go on and cut it to the same length?”. After all, at the Squier/Fender factory, someone who knows much more about fitting strings that I do, cut the original string to the correct length. One I’ll squirrel away for the next new bass I get which comes strung with roundwounds…

The intonation needs resetting because the strings are thicker and Rocksmith can be a bit sniffy when it comes to tuning – I should have remembered that after my fretless experiences – but over all, the strings feel great and sound very good.

The music world of Patrick Fitzgerald

Rumblings from the lower register

A daily selection of the best content published on WordPress, collected for you by humans who love to read.

The Art and Craft of Blogging

The latest news on WordPress.com and the WordPress community.